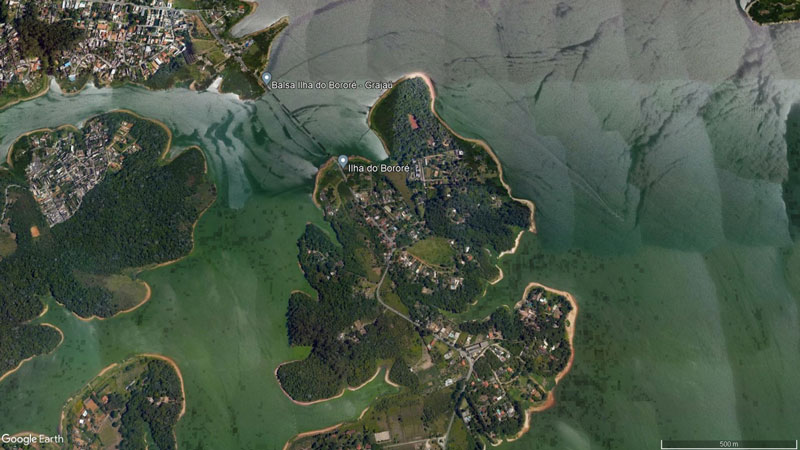 Bororé Island surrounded by the margins of Represa Billings. Image from Google Maps, 2022.

The place known as Ilha do Bororé was occupied by the native peoples and populations who settled between the rivers that descend from the top of Serra do Mar, currently the region of São Paulo. The mountainous relief that sheltered Grajaú neighborhood was widely inhabited during the 20th century. Technically, Bororé region, organized under the presence of Capela de São Sebastião around 1904, has become a peninsula among the flood caused for the construction of Represa Billings, in 1935. Until then, a small wooden path crossed the river that ran beside the hill occupied with farms, that maintain their rural characteristics up to nowadays. The access reinforced a certain tourist vocation when it was solved by a ferry, from where a bridge on the southern section of Rodoanel can now be seen.

During the 1990s, its population mobilized around the need for environmental management programs and basic rights requests to the municipality, having conquered the construction of a basic health unit, which articulates several other demands and activities. Their collective activities combined the community’s culinary production capacity to strengthen artistic and educational events that took place at Casa Ecoativa, an entity created in partnership with the Residents’ Association of Ilha do Bororé, occupying a property owned by the Municipal Water and Energy Company, responsible for dam and crossing. Part of the demands were met when the island became an Environmental Protection Area in 2006, coinciding with the demobilization of the projects. In 2013, young residents inspired by another collective from Grajaú, which would become a partner in actions, Imargem, made it possible to reopen Casa Ecoativa with a project approved in a municipal public notice in partnership with teachers and students from Escola Estadual Professor Adrião Bernardes. In the following years, the community counted on the collaboration of researchers and professors from the Faculty of Architecture and Urbanism at USP in the construction of the memory project “Do Bororé ao Mundo”.