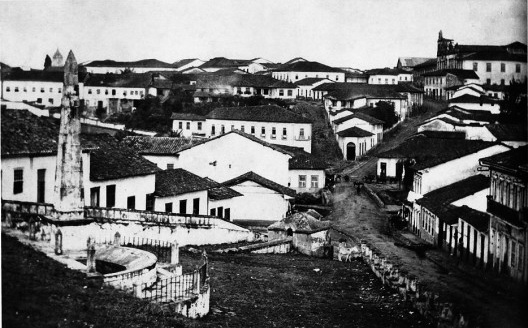 This is the place where Obelisco de Piques is at, considered the city’s oldest monument. Both the obelisk and the name “Largo da Memória” are an honor to the Provisional Government from 1813 to 1814, composed of Bishop D. Mateus de Abreu Pereira, Ouvidor D. Nuno Eugenio de Lossio and Squad Leader Miguel José de Oliveira Pinto, who built Ponte de Piques, the entrance for those who came from the countryside, and that was close to Ladeira.

That place was, therefore, one of São Paulo’s commercial centers. People sold meat and rice and once a week it was also where an auction of enslaved people took place. The auction started at midday, with the sound of the bells of Igreja de São Francisco. But since the sunrise, people who were about to be sold were gathered and so those who were interested in buying them.

Largo was also known as “low prostitution zone” as it is said in the consulted bibliography, “with black women sitting on chairs on the sidewalks”

In 1831, there was an attempt to close the access of Anhangabaú river, close to the place, towards Bixiga, for that was the place where many enslaved people created their quilombos.

Currently, Largo is very close to Casa Pretahub, a space of collaborative economy with an economic and cultural nature of diffusion and artistic preservation of permanent black culture”. Learn more about this project, that also works in Cachoeira (BA), in its social networks.

*Updated text, the original one is published in the Caderno de Campo do Coletivo Cartografia Negra.

Recorte do mapa do google maps