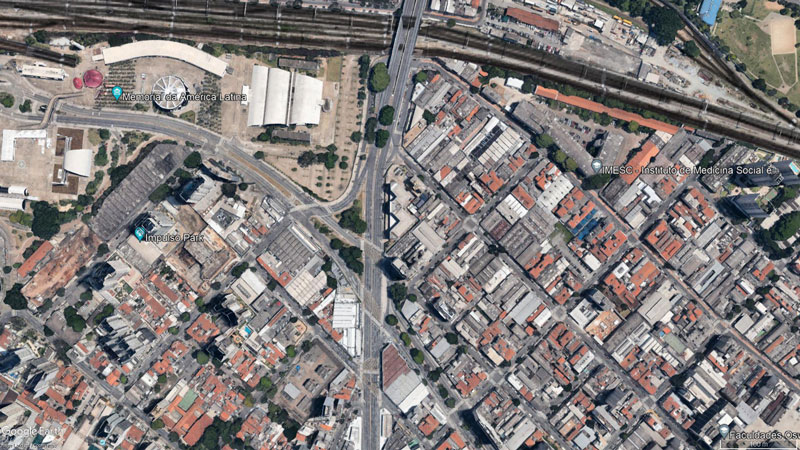 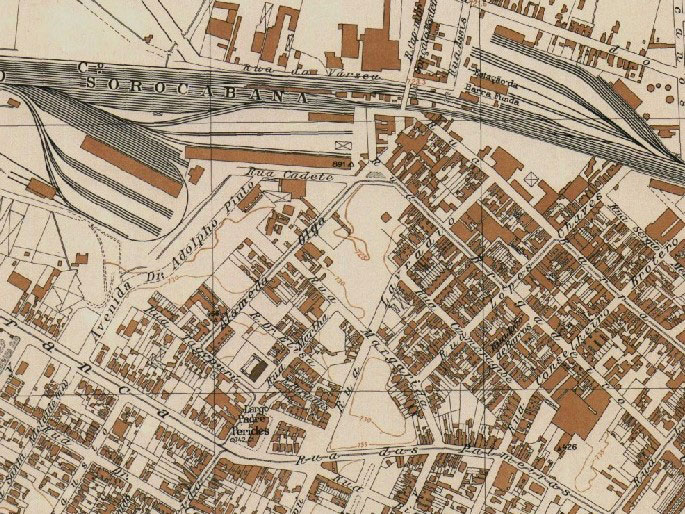 Surroundings of the unidentified Largo da Banana, between Olga and Brigadeiro Galvão streets. Clipping from the Topographic Map Sara Brasil, 1930.

The area formerly known as Largo da Banana was not officially recognized in the cartographies of the city, but memory records show that it was located close to the Barra Funda train station, an important warehouse for goods and supply of the city with the productions that came from Porto de Santos. Due to the neighborhood’s occupation in the region with workers’ houses, mansions and industrial warehouses, the square was shaped by the declivity between Brigadeiro Galvão and Olga streets, the area through which Pacaembu Avenue would be extended for the construction of the homonymous viaduct that would cross the railway. During the first half of the 20th century, the place had been used as an access and permanence spot of informal workers who worked temporarily as packers and porters, with a predominance of the black and mestizo population that lived in the surroundings and also dealt with commerce and community services, which was also used in the houses of the elite in the neighborhoods of Barra Funda, Campos Elíseos and Higienópolis. In their breaks and at the end of their work time, many gathered there for moments of leisure accompanied by samba and the roda de tiririca, a game similar to capoeira with its own musicality, provided by the banana traders, which caused situations of discomfort to other surrounding residents and episodes of conflict between the so-called “bullies” in the situation. These same groups became part of the formation of Cordão Carnavalesco Campos Elyseos and Grupo Carnavalesco Barra Funda, that became Cordão Camisa Verde, which began to organize activities around black festivity and sociability. The lyrics of these songs constitute the few historical reports about the area, until the end of the 1950s, when the samba singer Geraldo Filme reports the moment of destruction of the place for the construction of the Pacaembu Viaduct under the promise of the arrival of “progress ”, which throughout the 1960s provoked dozens of road interventions around the central region, disrupting the community dynamics around samba while consolidating the entities that originated the largest samba schools in the city.