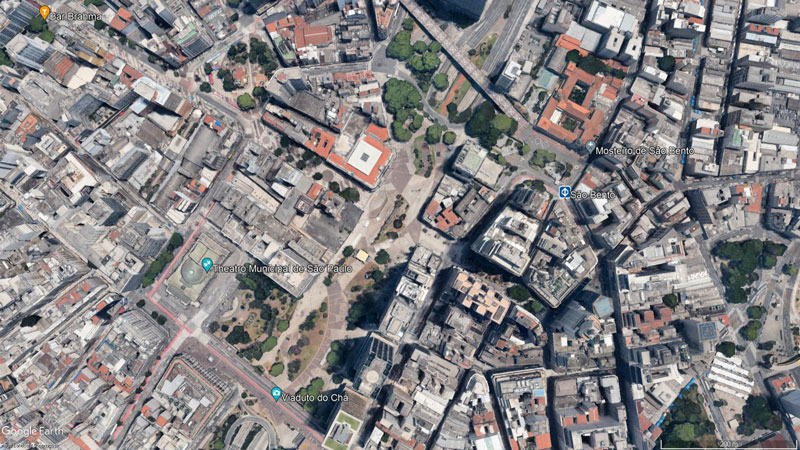 The Vale do Anhangabaú has undergone another recent urban intervention of debatable effects in the center of the paulista capital. The transformation of the landscape has once again aroused the debate about the aesthetic quality of the work and about the action of the city of São Paulo to the detriment of other priority actions. During colonization, the region served as a passage between mountains occupied by populations originating from the Atlantic Forest. In the 18th century, the area was appropriated by the imperial power having as its last official owner The Baron of Itapetininga, who implemented there the Chácara do Chá. At the center of the estate was the stream coming from Córrego Saracura, the Anhangabaú, which in the Tupi language means” waters of the Anhangá”, a protective spirit of the forests, rivers, and animals that takes a threatening form to punish human hunters. The municipal administration began to pressure the Baron to have his lands expropriated for the implementation of Rua Formosa, Viadutos do Chá and Santa Ifigênia, making the connection between downtown and the west of the city easier. Around it, precarious housing was built, occupied by a population mostly descended from enslaved peoples and considered unwanted as a result of the recent urbanization, therefore expelled by the renovation works. In 1904, the waters were already polluted and were channeled, creating the surface that would receive linear vegetation between footpaths. In the following decades, the extinct park suffered more road accommodations, until in 1980 the city of São Paulo promoted a competition of projects, inserted in other adjustments of the urban infrastructure of the region. The team of architects and urban planners coordinated by Jorge Wilheim and Rosa Kliass proposed the construction of a slab over the avenue, recovering the landscape potential, this time influenced by the forms of the Californian style. In addition to strengthening the vocation of pedestrian crossing, the paved areas provided agglomerations, and the stands with stone corners immediately attracted the attention of the first skateboarders of the city to circulate in that area, even before the end of the renovation works, having been, in 2019, responsible for the claim and realization of a “skatable” memorial that honors and patrimonializes the old Valley.